The Devil You Know

(Click the audio file if you rather hear the essay rather than read it).

The Devil You Know

Recently a friend said to me, and if I may paraphrase, the friend said, “I am very disappointed in the way that primaries turned out, I don’t want to, but I may have to vote for Hillary, please don’t hate me!”  Well, I have close friends who like Trump and Hillary, if I cannot accept their opinion I would turn in what is called a-close-minded individual.  Let us examine what is behind my friend’s phrase, why stop there! I heard Robert Reich say a similar thing to Chris Hedges in the program “Democracy Now.”  So, as I reply to my friend inadvertently I will also be responding to some of the sentiments of Professor Reich. 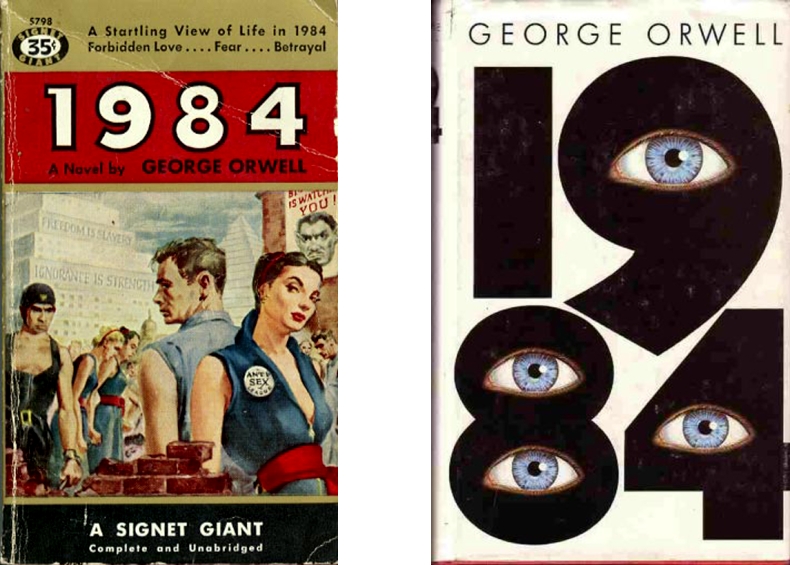 “1984” by George Orwell, please notice the unabridged copy is 35 cents.

I’m a great fan of science-fiction, one of my favorites is “1984;” which was written in 1935; before World War II. Why “1984?” A character in the background called The Big-Brother would control the masses with two things hatred and fear.  In my opinion, George Orwell was a freaking prophet, however, today the Big Brother are the corporations: Goldman Sachs, Exxon, ADM and the gang of Wall Street, via the K Street, (K Street is a reference to lobbying firms), which controls both parties, giving us an illusion of choice, through hate and fear.

When the school of psychology was invented, it actually legalized mythology. So, today when we talk about electing the lesser evil, let us examine the archetype of fear, hatred and vice.  It takes a great virtuous person to overcome fear, hatred and vice.  So, long before psychology came to be, the ancient-wise consolidated such condition in a tarot card called “The Devil” The American political system is addicted to a duopoly bent on hatred and fear.  When the government suppress education making it a privilege of the elite; the rest of the population will get their reasoning from well paid jesters like Rachel Maddow, Rush Limbaugh, Bill Mahers, Bill O’Reilly. I refer to them as jesters because they are the comic relief for hatred and fear. I covered the “jesters” in depth in my book “Archetypes in Our Lives, under the chapter “The Archetypes of Kings, Nobles and Jesters.”

Do you know who does not want Trump to be president? Donald Trump himself.  Recently Governor Kasich shared with the media that Trump Junior back in April called him to run as VP saying that he would be in charge of Domestic and Foreign affairs (evidently Trump and Trump Junior denied the offer).  Since fear was the theme of the 2008 election, let us revisit when most Republicans were very fearful of Obama, for his inexperience, and pseudo-liberalism. After eight years of Obama, we discovered that Obama never closed Guantanamo, never removed the right to bear arms, never passed immigration reform, never stopped tax breaks to big oil and gas, never turned the Supreme Court liberal, the wars in Persia never ended. He passed Obamacare, which is a more conservative copy of Romneycare and Nixoncare. See? The Republicans feared Obama for nothing, because nothing happened.  The same will happen with Trump nothing will continue to happen.

Betrayal may be a strong word, but what Bernie promised to us was to participate in a revolution, and yet he endorsed the very person who is in the pockets of Wall Street and K-Street.  According to Bernie  own words he is very fearful of Donald Trump.  America is the land of the free and home of the brave, except during the elections when we have no freedom to vote for a third-party and we have to be afraid of the opposing challenger.  See? The mass media, and the elite uses hatred and fear, like an electrical switch, it all depends if they need the American people to fight a war or to vote in a election.

When you look at the archetype of the tarot card, you will notice two things: Firstly, that the chains around the necks are easy to remove, because the loops are much larger than the heads; second that the chains will remain there because the couple also have tails symbolizing the animal instinct resorting to emotions of fear and hatred rather using reason and logic to to remove the chains, to run away from the devil.

So, now we come to a new election, the jesters and main stream media is offering hatred and fear, a reprise of 2008?  No! Not really, a reprise of every election, so much so that George Orwell already synthesized in his book “1984” back in 1935.  Now, speaking with friends from both sides of the political aisle: How can you live with the guilt of electing Donald Trump if you vote for a third-party candidate? Or how can you live with the guilt of electing Hillary Clinton if you vote for a third party candidate?  There’s no way out, you are stuck forever with a big liar or a bigger liar.  We are stuck in voting for a pseudo-billionaire and conman seducing people with the illusion that they would become millionaires by giving up their lives savings in Trump University.  Notwithstanding, we are stuck for voting for another liar (according to the FBI and DOD reports) that for “convenience,” decided to have her own servers without any internet security exposing the country’s national security, in order to circumvent the Freedom of Information Act.

The torch up-side-down it is symbolic to ignorance, or lack of logic or wisdom.

When we are moved by hatred and fear, we will forever be stuck with the devil’s chains.  Bernie Sanders campaign was a moment of lucidity which would allow us to remove the devil’s chain, but Bernie Sanders endorsed the devil you know.  We will forever be stuck between choosing a lesser evil than a greater good, as long as we abide to fear and hatred fed to us daily by the jesters of the main stream media which are owned by Wall Street.

To all my friends, acquaintance and readers, if your logic is to choose a lesser evil, that’s no logic at all.  That has been the plan of Wall Street all along, we will get a new George Bush or a new Obama, nothing will get done you will be stuck again with the devil you know.